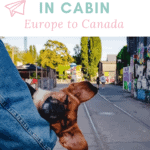 I haven’t been talking about travel much on the blog lately, but I figured this post could be informative for people considering to travel with a dog in cabin. It isn’t as simple as booking your tickets and showing up at the check-in desk and it requires quite a bit of preparation.

This is a very long post, but I’ve included headers to help you navigate through it if you don’t feel like reading the whole thing. There is also a vlog on my YouTube channel which you can also watch directly below.

*It took me a while to finish the post, so yeah, we’re back in Germany now! Well, actually we’re in Slovenia for a week :) I’m currently sitting on a plane from Berlin to Toronto, eager to reach Montreal later tonight. Martin and I haven’t been home (our primary home, since we also call Berlin home now) in over a year and we managed to convince our bosses to let us leave for the month of July. We’ll be taking 2 weeks off and working the rest of the time, from Quebec.

When we adopted Croquette in December, whom I still haven’t introduced properly on the blog, we made sure that she wouldn’t be too big to travel with us to Canada. Which wasn’t easy since we adopted her as she was still in Romania. Are you interested in knowing more about that too? Let me know in the comments below :)

Should you even bring your dog on the plane?

Well, you’re the judge. You know your dog and can assess whether they’ll be calm or cause a scene. You can talk with your vet and give her a mild sedative, but it’s not the best. Also, are you putting your pup on a long flight only for a short vacation? Imo, it’s best to find them a good sitter in those instances. Flying can be very stressful and shouldn’t be taken lightly.

Your pooch won’t be flying first class and chilling on the seat beside you. No. They’ll have to remain in their carrier for the entirety of the trip and even be stowed underneath the seat in front of you for take off and landing.

However, since we were staying a full month in Quebec, it totally made sense to bring her with us. Spoiler, she absolutely loved it! She got to discover new places, she even went for her first swim!

But also keep in mind that having your pet with you will set limitations on your travel (finding pet-friendly accommodations, activities, going out during the day and having to leave them in an unknown place, etc.).

Brachycephalic dogs, aka short nose dogs such as pugs, aren’t allowed on most planes, for their own safety. You see, they’ve been bred so much that their respiratory tracks can’t function normally and they’re at risk of suffocating to death. Same goes for cats such as Himalayans.

How big can the dog be?

Each airline has different rules, but most don’t allow dogs heavier than 6 or 8kg, bag included. They also provide maximal dog carrier measurements, so the first thing to do to find out if you can travel with your dog in cabin is to look at the airline’s website or call them directly.

Croquette arrived in Berlin and was heavier than expected; 7,8kg instead of 6!! And now that she’s fed properly she weighs almost 8,5kg! But ultimately, I figured out that she could fly with us with one and one airline only, Air Canada.

She’s also long. Very long. I always joke that she’s like one dog and a half, which is cute and all, until you try and find a carrier that fits. I bought two which ended up being too small and, as I was about to give up, I finally found one from Germany that fit the measurements and allowed her enough space to turn around comfortably (55 cm L x 34 cm W, 30 cm H – but can be squeezed down a bit to fit the 27 cm allowed by Air Canada).

Once you have the confirmation from your airline, you can book your tickets. Air Canada recommends that you call them immediately (if you didn’t book directly with them that is) and add your dog to your booking. This way they can refund you or rebook you if there’s any problem.

The first employee I talked to told me I would pay at the airport during check-in. I had to call the airline numerous times because of problems caused by the website I booked with, which was awful (never ever book with Travelstart!!), and the week prior to our first flight the lady on the phone said I could pay upfront by credit card. It would also maybe make things easier and make them less encline to deny her, which is always a possibility.

And it did make things easier! They did not weigh her nor did they measure her bag. Nothing. The fact that she was just there being all cute in her transport bag probably helped too.

If they do deny a pet, they won’t be able to fly in cargo either, not on such short notice, which means that you need to have a solution on hand. For example a friend who could come pick up the dog immediately and take care of them while you’re gone.

How much does it cost to fly with my dog in cabin?

Again, all airlines are different. It also varies depending on whether you fly international or domestic. With Air Canada, we had to pay 75 euros or CAD100 EACH way. Not cheap considering that she’s just spending the whole flight in a bag underneath a seat… But I also think that they want to discourage people from flying with their pets, which makes sense.

Most dogs don’t need much, but make sure to bring enough food for the first 2 or 3 days until you can buy food. If they’re on a specific diet, it could be worth it to do some research in advance to make sure that you can find the right food at your destination. We also packed treats, a blanket, a toy and a collapsable bowl. Of course, don’t forget your dog’s medication if he’s taking any.

You also need to bring their passport and/or health certificate, though no agent actually checked it. It’s always best to be prepared, just in case. One more thing that we brought but didn’t use, pipi pads. They probably would have come in handy had we not find the pet relief station.

Do I need to quarantine my dog upon arrival?

It depends on the countries you’re traveling from and to. Check out your government’s website for more info. For trips to Canada from Europe, you don’t need to, but your dog needs to be vaccinated against rabies. Again, make sure to carry their passport or health certificate!

Once you’re at the airport, you simply go through customs where you’ll receive a piece of paper, which you then take to another agent. I don’t know the exact name of that second “office”, but it’s where you go when you have something to declare. People at the airport will direct you. There, you will have to pay a fee for your dog – we paid CAD33,90 for Croquette.

After that, we went through security before catching our flight to Montreal. At that point, we were finally allowed to take Croquette out, she’d been in her bag for about 10 long hours!! We took her to the pet relief station, which she used out of desperation since she didn’t recognize it as grass.

Afterwards, she was supposed to go back to her carrier but she’s so calm that we kept her on our lap until we were ready to board. Our flight was postponed 3 times and we ended up boarding at 8pm instead of leaving at 5pm. We only took off 40 minutes later and, after a 50-minute flight, we were stuck on that freezing plane for another 50 minutes before we were allowed to get off. The whole time she had to remain in her bag and at that point she was fed up.

She slept through most of the first flight and didn’t make a peep. I fed her a few kibbles and cookies here and there to keep her calm. But now, we’d been up for a very long time and she was getting restless. We talked to her and gave her kibbles, but she kept turning around and crying as if she was asking us to let her out. If she had been in the cargo this whole time, I would have freaked out knowing that she was there alone and suffering because of all the extra delays.

As soon as we exited the aircraft I took her out and held her in my arms until we were outside. No one said a word. She sniffed around, did her business and our friend picked us up. Some dogs could be anxious, being in a new country with lots of different smells, but Croquette is such a chilled dog that she was happy to have a new place to explore.

It took her 3 days to beat the jetlag though. She kept waking us up between 4 and 5 am to go for a walk and eat. FUN… After that she was back to normal and sleeping through the night like she always does.

Flying back to Berlin

On the way back, we had an overnight flight which made things a bit easier. And this time, no delays! She slept through the night without moving, to a point where I was almost worried. She also slept the whole day AND the whole night at home. I think that she was exhausted from all that traveling!

She also had a bit of blood in her stool followed by a few days of constipation. It all went back to normal with lots of rest and after switching her back to her regular food. She had the same symptoms after her long trip from Romania to Berlin, so luckily I knew not to be worried. It just goes to show that long trips take a toll on them!

What I would do differently

Quite frankly, having layovers stressed me out a lot. And I think they stressed out Croquette too. Since there are no direct flights from Berlin to Montreal, we plan to take a train to Frankfurt next time and fly directly from there. It’s not necessarily quicker, but train travel is much more relax and Croquette is already used to it.

She can just chill on the seat beside us (or literally on us, her favourite) and doesn’t have to spend 10+ hours in her carrier. I will actually do a vlog about our trip to Slovenia, so stay tuned for that!

If you made it all the way to the end, I hope that I answered most questions that you might have if you plan to travel with a dog in cabin. If not, don’t hesitate to ask me anything in the comments!