Whether you’re vegetarian or not, you’ll love this vegan meat pie, a healthy rendition of a Holiday tradition from Québec! Good news, it can also be frozen.

If you’re from Québec, you know what a tourtière is, no doubt about it. But if you’re not, introductions are in order. Tourtière is a traditional meat pie that you’ll find on pretty much every Christmas table in Québec, along with meatball stew and a turkey.

The name apparently has old origins as it was prepared with tourte, a bird that’s unfortunately gone extinct. It’s now usually made with ground beef and pork and Christmas spices.

I’ve been hearing about vegan meat pies for a while now and I was eager to try them. Since we’re staying in Hanover for the Holidays, we decided it was the perfect opportunity to recreate this tradition. I didn’t know that finding a pie plate in Germany would be so complicated though, but 5 stores and 24 euros later, Martin brought me a nice quiche-style mold that worked perfectly. It ain’t always easy living abroad! #firstworldproblem

I knew it would be good, but I didn’t expect the texture to be so similar to the meat pie my grandma makes! My skepticism quickly transformed into exaggerated excitement. I even called my sisters and wrote my best friend to tell them about my discovery!

I took my inspiration from different recipes and created my own and the result is quite impressive. The texture is soft and the taste if perfectly balanced! For the shortcrust pastry dough, I was a bit worried after reading lots of comments on diverse recipes.

I used this one from Cherry Pepper (video in French) and I can tell you that it will be my go-to recipe from now own! It’s easy to make and to handle, so much so that I was afraid it wouldn’t have the right texture, but no, it was just perfect!

Whether you’re vegetarian or simply want to eat a little less meat at Christmas and not feel like a stranded whale the day after Christmas, this vegan meat pie is for you. Millet is also a lot cheaper than meat and didn’t cause the useless death of a sensitive animal.

Plus, unlike the original version, my tourtière contains fiber and an array of vitamins and minerals. You can of course prepare it in advance, bake it a little and freeze it. you can also make mini pies as gifts for the Holidays!

Do you have your copy of My Vegan Christmas yet?

Let me know how your family likes it :) I wish you all wonderful Holidays with the people you love! Merry Christmas! 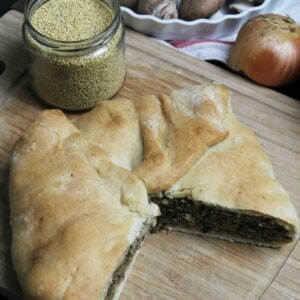